Before proceeding to say when diamonds were first used for cutting glass, it may not be amiss to state when the art of cutting diamonds themselves was first discovered. The ancients were ignorant of the art of cutting the diamond, and hence they used it in its natural granular or crystallized state. Though probably known to the artists of Hindostan and China at a very early period, it was unknown to the Europeans during the middle ages ; for the four large diamonds which ornament the clasp of the imperial mantle of Charlemagne, which is still preserved at Paris, are uncut octoedrical crystals.

In 1456, Robert de Berghen, a native of Bruges, in the Austrian Netherlands, discovered that a diamond might be cut and polished by a powder made from itself, with the aid of certain iron wheels. Hence the well known adage of " diamond cut diamond."

Between the XIVe and the XVIe century there appeared in Italy a knife with a diamond point which made it possible to make more precise cuts.

The earliest mention of the diamond being used for writing on glass occurs in the sixteenth century, when the following lines, which may be considered as the first application of the diamond to this purpose, were written by Francis the First of France with his diamond ring on one of the panes of glass in the Castle of Champfort. The king's purpose in writing them was to intimate to Anne de Pisseleu, Duchess of Estampes, that he was jealous of her.

That could be translated as: Do not trust women, because they often change their minds.

This new mode of recording ideas was then thought exceedingly ingenious, and the merit of having discovered a new property in the diamond was awarded to his majesty. After this, but still before it came into the hands of the glazier, the diamond was successfully employed in etching or engraving figures on glass vessels, and some very beautiful specimens of this novel art were produced at Venice as early as 1562; so that little time had been lost in applying the discovery of the French king to useful purposes.

The art of cutting glass with a wheel, a method applicable to crystal only, was invented, in the beginning of the seventeenth century, by Caspar Lehmann, lapidary and glasscutter to the Emperor Rodolphus II. 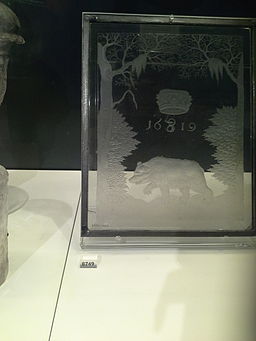 Glass made by Caspar Lehmann

When the discovery of glass cutting wheel it can be attributed to the following authors: OM Pike (jeweler) who believes that there could be another way to cut the glass experimented and developed a hardened steel rod placed between two friction rollers (1868) and Samuel G. Monce (an employee of the RJ Ives Machine Shop in Bristol) who improved Pike's idea by incorporating a bone handle and a steel wheel (1869).